Going back to regularly scheduled programming, I did get my “homework” done for next guild meeting.  If you just started reading, our challenge project this year is to do a BOM of your own choice.  I’m making the Fons and Porter Patriotic Sampler as mine.  To get it finished in the allotted time frame, most months I have to do more than one block.  This month, I did the large eagle block, and the star/vine applique block.  I was also able to start attaching some of the blocks to each other.

I am not very proficient at the the machine satin stitching, or blanket stitching.  They could both be better.  But, the only way to get better is to do more of it.  I would like to take a class somewhere, someday…in the meantime, it is what it is.  Not great, but I’m ok with it.

It’s been an up and down last few days for Greg and me.  We just need to get this stupid brain tumor episode behind us.  Your logical self tells you it will all be ok, but the emotional part of you…well, that’s a whole ‘nuther story.  I must admit, it’s quite unsettling.  I want to thank everyone for their kind comments on my previous post, and the prayers and well wishes.  It means a lot to me and to Greg.

I want to share a blessing I received at the guild Christmas party.  Remember Sana’s quilt? I took it to her at guild, and she handed me a Christmas present to hang in my quilting room.  How cute, and how perfect for my quilting room.  Little sheep, and I love wool batting.  I hung it where I can see it often when I’m quilting.  Thank you, Sana…I love it! It makes me smile when I see it.

I had planned on posting a new blog post Sunday.  I was going to blog about my current quilting projects, the guild party, etc.  Before that ever happened, about 10:30 Sunday morning, my husband had and “episode”.  He stood up from his recliner to go to the kitchen.  His right arm suddenly went numb, and I thought he looked “funny”.  He assured me he was fine.  Yeah, right.  He poured himself a glass of juice and went back to his recliner.  Within just a few more minutes, his chin became numb.  I grabbed my phone, called his daughter who is an RN, said something is wrong with your dad and I think we need to go to the ER, his right arm and chin are numb! And then I  ran to throw on some clothes and shoes.  I was still in my pj’s.  She got here, looked at him, and said yes, we were going to the ER.  His blood pressure was 199/133.  They found some bleeding in his brain, and said they were sending us on to Amarillo.  However, Amarillo did not have any neurosurgeons on call, so they ended up sending us to Lubbock.  In an Eagle Med plane.  Apparently, my husband is too tall for the helicopter.  Since he had to be flown by plane, I was allowed to fly along with him.  My stepdaughter drove to Lubbock, while my son, her husband and family stayed behind to take care of things at home, til we knew more.

At first, we were told that the bleed was probably caused by the blood pressure, which was at  a fatal level, and would most likely not require surgery. But, then one of the neurosurgeons physician’s assistant informed us that the brain bleed was about an inch away from where it should be, to be caused by the high blood pressure.  It just wasn’t in the right place.  So, Monday he would have an MRI and MRA.  They admitted him to ICU.  Monday, Lea and I were in the ICU waiting room, and the same assistant came to tell us that those tests revealed a mass in his sinus cavity, that looked to be an “angry mass”.  He said it resembled some big long word that I can’t even remember, but that it might be a meningioma, but he didn’t think it looked typical of one.  A few hours later, a neurologist came to meet with us and told us the tumor was not in his sinus, but behind it, deep (but not too deep) in the brain. Said it had probably been there several years, and the neurosurgeon would most likely do a biopsy or just remove it.  He said the neurosurgeon would come meet with us later that day, or the next.  We did not get to see him til yesterday morning.  Monday night was a long, painful night for me.  We so needed/wanted answers, and a plan.  Yesterday, the neurosurgeon, who we really liked, told us he is certain it is a benign meningioma.  (A meningioma is a tumor that arises from a layer of tissue (the meninges) that covers the brain and spine.  It is not IN his brain, but on the covering of the brain.  It is still a brain tumor, but a treatable one. It is in the center of his forehead, right above the top of his nose.  He said it has not only mushroomed up, causing swelling an inflammation in the frontal lobe of his brain, but has grown downward, infiltrating his ethmoid sinus cavity, as well.  That makes his case a little more complicated, but he was very positive and confident that he will be able to successfully remove the tumor with surgery.  It must be removed, or it will continue to cause inflammation in his frontal lobe, affecting moods and causing bizarre behavior, and will eventually interfere with his optic nerves, causing him to go blind. It will require a craniotomy, which is a bit intimidating and scary.  Because it has compromised the barrier between the brain and the sinus cavity, he will have to build a new barrier between the two, with tissue taken from Greg’s thigh muscle.  They will take some fascia and a little fat to close off the opening the tumor will leave, preventing sinus materials from going up into the brain, and prevent spinal fluid from going into the sinus.  He assured us they do these surgeries all the time, and Greg should have a good outcome.  He has to have a cardio evaluation, and meet with a pulmonary doctor, and meet with the neurosurgeon again, before he can be cleared for the surgery, which will probably be toward the end of January. A chest CT also showed some nodules and density in his lungs, that they want to watch, and will be having followup on that, after we get past brain surgery.  We got to leave the hospital late yesterday afternoon, and are back home, to enjoy Christmas together.  Right now, I’m just so happy to have him still here with me. That is the best Christmas present I can think of!

Quilt guild style! Tuesday night is our annual Christmas party.  It’s a fun time.  We eat (really well), we do a fun Christmas fat quarter exchange, a “dirty Santa” ornament exchange, and play Quilto for various “prizes” contributed by the members.  There is always lots of laughter.  If you aren’t familiar with “dirty Santa”, it’s a gift exchange where you actually get to steal from each other, until a gift has been stolen a predetermined number of times, and then it is “retired” from the stealing, and the current holder gets to keep it.

If you are a member of my guild, you might want to stop reading now, if you prefer surprises. 😉 If not, keep scrolling for pics of my contributions to this year’s festivities.

The ornaments for exchange can be purchased, or homemade.  This year I decided to make one of the embroidered Christmas angels, from one of OESD’s past Christmas collections.  I love the way these turn out, and I hope she makes one of my fellow guild members very happy. 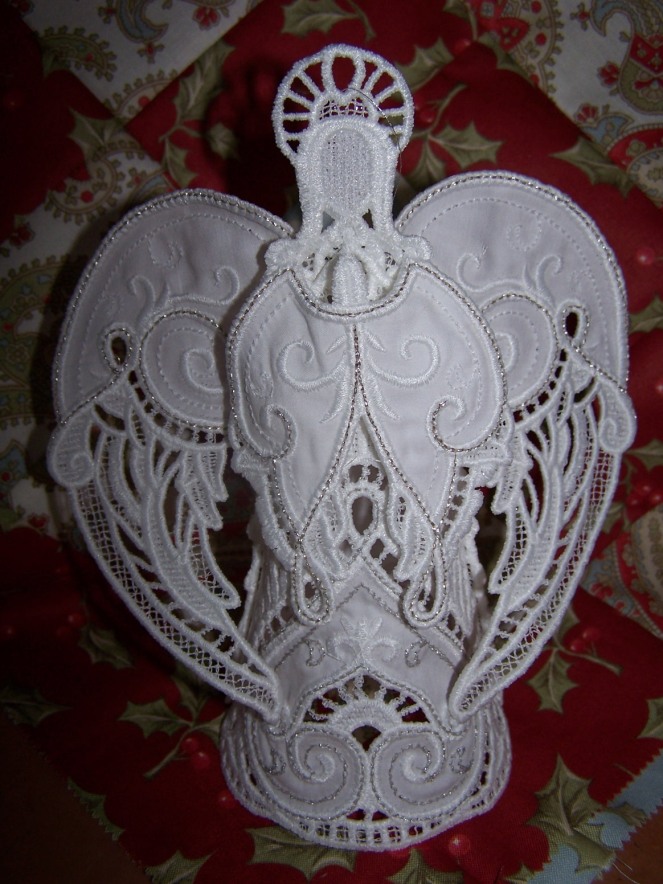 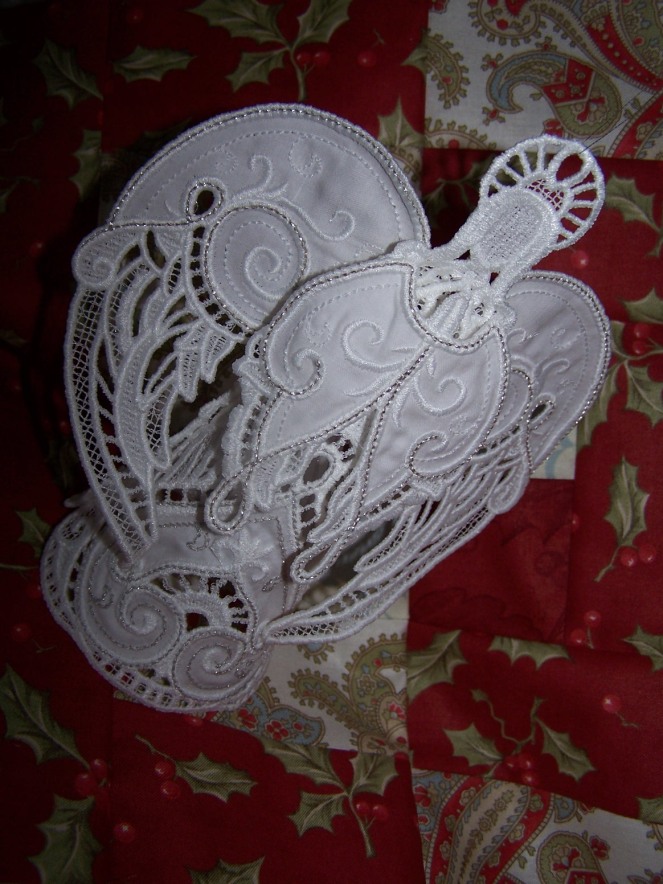 And my Quilto prize contribution is a pretty Moda charm pack, and a yo-yo maker.  You know, recently I fell in love with these yo-yo makers. 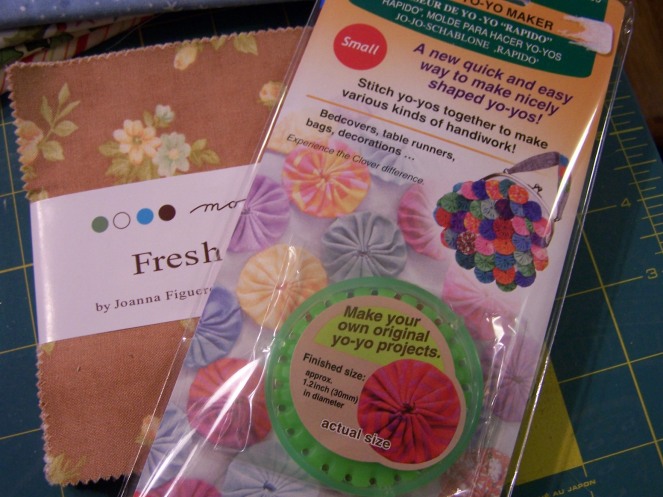 I finished Judy’s pinwheel quilt in time for her to gift it to her granddaughter for Christmas.  This was such a cute top, and I really got to let loose and just enjoy the quilting of it.  Thank you, Judy!

There isn’t anything spectacular about the quilting on this one, but I sure had fun quilting it! I love fun and whimsical quilting! So my thing! 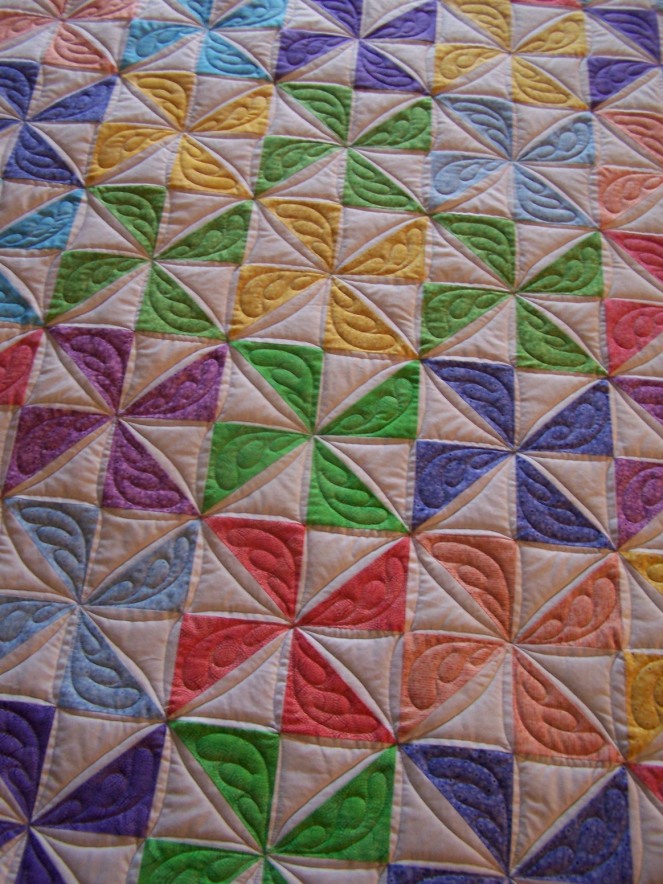 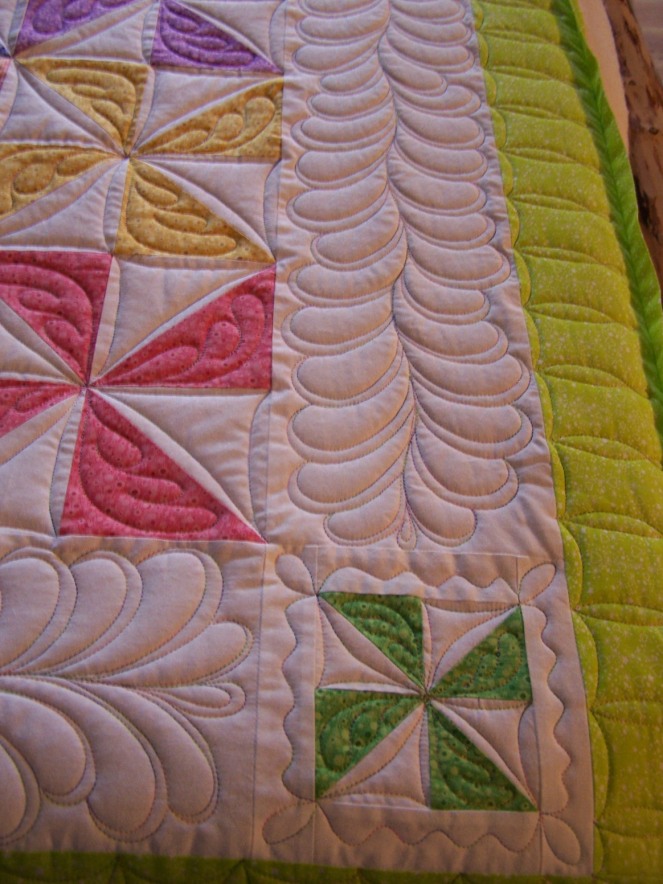 A little personalization (I think this could’ve been done better, but hopefully, it’s good enough) 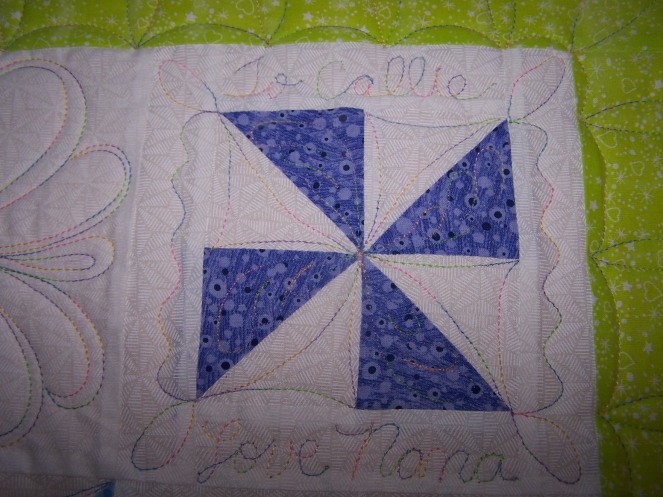 I love the backing fabric on this one! It’s a cute turtle flannel! Besides being super cute, it is so soft and cuddly! 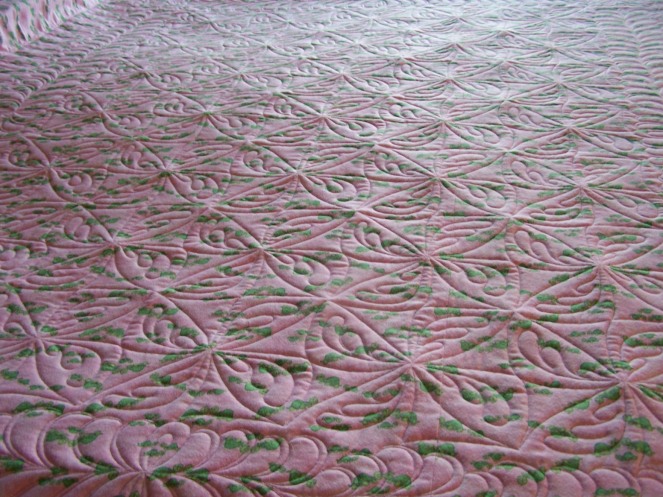 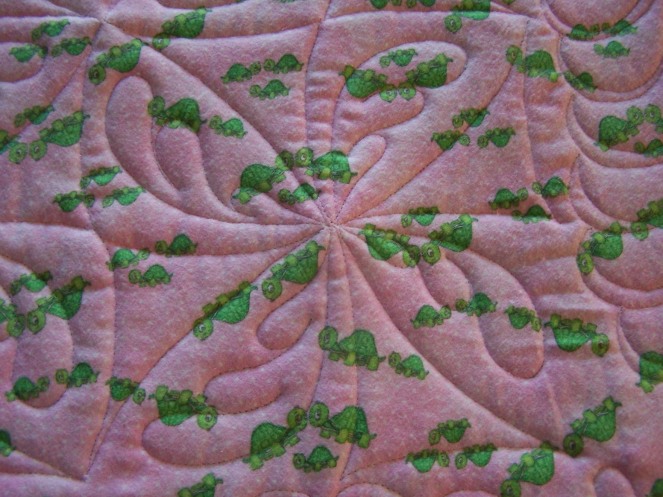 I think it’s will surely make a little girl smile! Great to work with you again, Judy! Thanks for letting me have fun with this one! 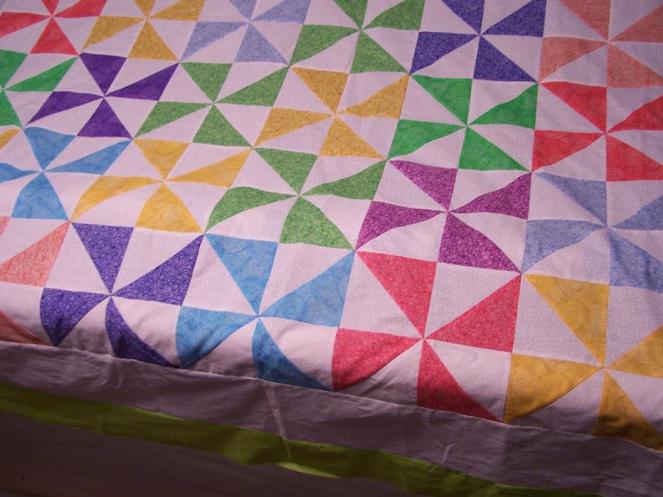 A few funky feathers to make those pinwheels fly!