This weekend, I was marking a feather spine on my log cabin variation quilt I have been posting. And, I found a tiny rip in one of the logs. And, then another in the log right below it. I have no idea how they got there. My first thought was one of my pins I had used to baste it as I was stabilizing. But, I don’t know how one pin ripped the quilt in two different logs. I’m still thinking that scenario is the most likely culprit, but for the life I me I can’t figure out exactly how. Once the shock wore off and it fully sunk in, my first reaction was @#$##!, quickly followed by just wanting to melt into a tearful puddle on my quilting room floor, to moving to a plan of action. I have to fix this somehow! I have too much work and fabric invested. I was way past the point of taking it apart and piecing in new logs. That would have involved too much frogging and requilting. I have plenty of extra fabric, so I got scraps from the two pieces involved, matched up the print, and appliqued two square “patches” over top of each rip. I think once it quilted, it will hardly be noticeable. Still, it was a bit disheartening and made me feel a little sick. But, in the grand scheme of life, this is not really a problem…merely a little situation. And, I know the recipient is still going to love it. Let me add at this point, that this is NOT a client quilt, thankfully, or I would have been hysterical. I don’t know if I have mentioned, that shortly after Greg passed away, I stopped quilting for hire. I only work on my own stuff now, and as much as I loved quilting for others, it has eased some stress in my life.

I didn’t think to take a pic til I had already repaired one of them, but this is what they both looked like. The purple you see is from my erasable fabric marker I was marking the spine with, then I circled the rip with it.

This is after both had been patched. Not too bad, I think. It will have to do, regardless. Feel free to add your comments regarding how you would have fixed it, had it been yours.  That might make for some interesting discussion, as well as being helpful to someone else finding themselves in the same situation. Again, keep in mind, this is not a customer quilt. Along that line, what would you have done if it was a customer quilt? For sure, they would need to be involved in the decision making process, I think. 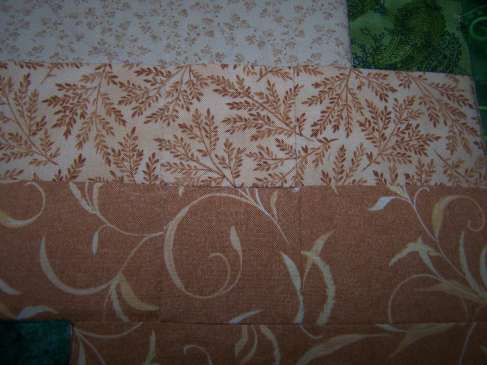 On the quilting front, things didn’t get much better after that. I began to “feather” the spine, and being that I am a little out of practice, I did not at all like the “flow” or look of the first few I stitched, so I stopped and am frogging them. I hate frogging, so I do a little, then leave it for a bit, do a little, then leave it. It may take a few days to get the few I quilted back out, lol. Eventually, I will let you know how they finally turned out, hehe.