Last night,  a storm blew in with a vengeance.  I was about to drift off to sleep when the hail started pounding the house.  It was fairly small, mostly marble size, but relentless.  I stood watching out the patio door, helplessly wondering about the baby doves and my favorite toad, Zapper.  He had not come to the patio last night, which he does about every other night, to eat his fill of June bugs and other insects, underneath the patio light.  This has been his (or her) routine for the past three summers.  I’ve grown very fond of this toad.  I had seen him last, laying underneath the iris leaves, in the southwest corner of our yard,  one of his favorite hangouts. When the hail finally let up, I threw on a rain jacket over my jammies, slipped on a pair of flip flops, grabbed a flashlight, and went to check on him. It was after midnight.  It was raining. I know, most sane people would’ve gone to bed.   It’s a TOAD.  But,  I couldn’t.  I had to look.  When I rounded the corner of the house, and the light hit “his spot”, I was so afraid of what I would find.  The hail had completely covered his little corner, like a snow drift.  I began to dig it away, and sure enough under about two inches of a solid pile of round hail stones, was Zapper.  As I got more moved away, he wiggled his leg.  I got him pulled out and he was so freezing cold.  I went straight back to the patio with him, where I could get a better look at him.  He looked ok, and once he got warmed up, he ate a couple of June bugs on the patio.  Then he hopped off.  I haven’t seen him today, so I hope he didn’t have internal injuries.

And sadly, at least one of the little doves is dead.  I’m not sure about the other one.  I *may* have seen it this morning as I was leaving for work, still alive, but I couldn’t be sure.  I haven’t found it’s body, so hopefully it made it.

The yard is littered with leaves from our trees. This was the view of the backyard this morning.

And this is the little hole where Zapper was.  He was literally buried in hail.

This is the front yard debris and a picture of the roof, where the doves used to be, covered with Mimosa tree leaves. 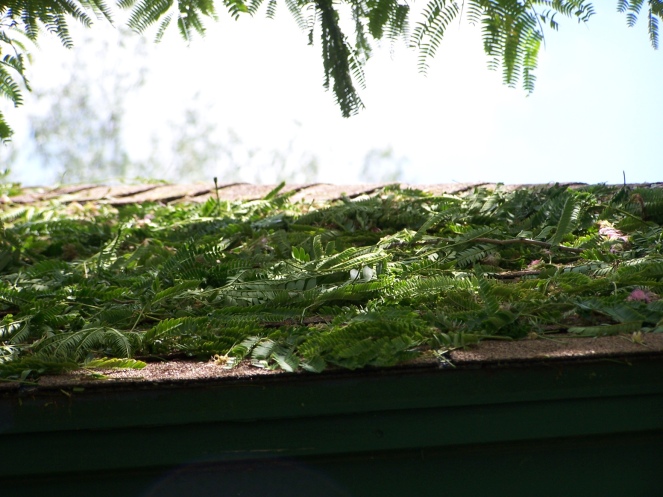 Poor little things didn’t stand a chance, it hit so hard & fast.  But other than that, all is well.  It could’ve been much worse.  I know that.  And I am thankful that it wasn’t.  It’s all part of the circle of life, the natural order of things.  But that doesn’t mean I can’t be a little sad for a little bird (or a toad) for a few moments, does it?

Well, I don’t have anything new to report on the quilting front, so how about the rest of those piddling around the yard photos I promised.

This is my little plum tree.

I just thought these leaves at the tip top of it looked pretty.  Reminded me of pretty fabric, or a pretty art quilt. This pic is just to give you a perspective of where they are on the tree.

Day lillies that came from one little sprig, in a stryrofoam cup, brought home by a 1st grader, for Mother’s Day.  These are also one of the things that make me happy when I see them.

And lastly, a hosta blooming.

Today, I will treat you to some pics of my Mimosa tree.  I was so happy to discover that one of the the young trees growing in the front yard of our house, when we bought it ten years ago, was a Mimosa.  I love these trees.

I have a couple of chairs sitting underneath the Mimosa and the Locust trees.

and I enjoyed some nice time spent there this afternoon.  We did not get the bad storms yesterday, just some rain last night, and today the high was only in the 70’s.  It was so relaxing to sit underneath that beautiful canopy of leaves and pink, fluffy blossoms,

while I finished handstitching the binding on the blue & yellow log cabin quilt.

And yes, I did get the binding finished!  Yea!  I only had to work at my day job til about 10:30 this a.m.  So that gave me some good time to work on quilting projects.  I got started on the customer panto around 3:00.  I got three rows done, and have about 2.5 left to go.  I could have finished it today, but instead I chose to go out to dinner with my two favorite men 🙂 .  We went out to a local Mexican restaurant. When we came home, I got it all lined up and ready to go for the next row, but decided that could wait til tomorrow.