I am still home. Lea headed off to Lubbock this morning to spend the weekend with Greg. I kept Catey (Lea’s 6 yo. daughter) today, while Brian and Brayton (Lea’s husband and oldest son) worked to clean up the mess at our shop. 70 mph straight winds ripped off a good portion of our roof, and it’s quite a mess.

The first report from Lubbock today came from Terry May, who has been staying with Greg this week. What a great friend. He headed home today, and before he left he told Greg he was leaving, and Greg opened his eyes, and Terry told him he would see him when he comes home. He said he thought he nodded at him, but he wasn’t completely sure.

Well, when Lea got there, she confirmed that he is nodding a little now, in response to questions. She said it’s a little dip of the chin. He was really moving both of his arms around again today. She said he is using his right arm a lot, and even rubbing at this eyes and the corner of his mouth with it, and scratching at his nose. She said once, he even had both index fingers stuck in his ears. We aren’t sure what that was about. She said it appears that he is trying to use his shoulders some, to readjust himself.

Lea was saying a prayer with him, and when she said Amen, one of the pulmonologists said “amen” with her, and nearly scared her to death. She hadn’t even realized he had come in. He said he is breathing totally on his own, just a little pressure support from vent, and said he is looking better every day. When he left the room, he raised his hand up and said “we’ll keep the prayers going”!

The nephrologist came by later, and they started the IV fluids this evening. He said if his numbers continue to decrease (creatinine, BUN), that he may get to go to a Tues/Thurs dialysis instead of Mon/Wed/Fri. Will just have to wait and see what the labs look like on Monday.

Back to my day here, Catey and I enjoyed our time together. This afternoon, I decided that I would see if she wanted to work on some quilt blocks with me, and she did. She loves crafty things.  I have been trying to squeeze in my blocks every month, for my guild’s Block of the Month challenge, and so far have managed to get them done, even though I haven’t been to a meeting since January.  I did the cutting and the “steering”, while Catey pushed the “gas pedal” for the sewing machine. She loved working on these with me. I may have a new quilter in the making. 🙂

Here is a pic of the rest of the blocks I have completed, thus far. 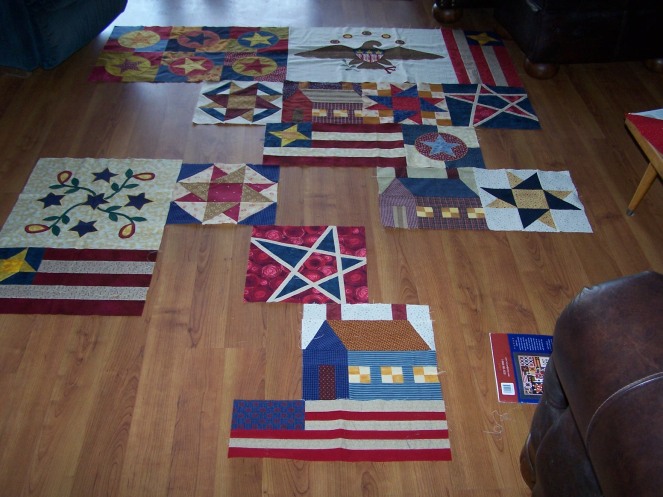 Today sure has seemed like it was more good news than bad, and for right now, I will be thankful for that, and keep hoping and praying for more of it!

I’m a simple woman…at least that what my DH (Dear Husband) used to say about me…I was a wife, I am now a widow, mother, step-mother & step-grandmother, quilter, and have a full time job in criminal justice. I lost my DH on May 22nd, 2011. I live in a small town in Texas. I love piecing quilts, I love quilting quilts. I have a serious addiction to fabric. I’ve been quilting since 1998, and purchased my first longarm, a Gammill Premier, in 2004. I upgraded to an A-1 Elite, named Corky, in March, 2007. I am in the process of rebuilding my life after losing my spouse. All photos and content in this blog are my own, and I request that you not download, copy or otherwise use anything here without my permission. I hope you enjoy visiting my blog and would love to hear your comments. Thanks for stopping by! View all posts by Wild Rose Quilter

13 thoughts on “April 16th…has been a pretty good day”